Sophie has been on this HUGE kick about what she wants for Christmas, which has probably been brought on by the sudden onslaught of super-cool toy catalogs that have arrived recently.  Seriously, FAO-Schwartz should totally be banned at our house since Dandy is all but sleeping with the catalog!

Anyway…  Sophie and I were shopping some weeks ago and had swung (swung?) into BJs to pick up yogurt and butter (did y’all know they were closing the BJs in G’ville?  I’m so not happy) and had waltzed through the toy aisle just to see what was already out.

Sophie immediately took a shine to the WowWee Alive White Tiger Cub.  It was $45ish which I thought was pricey until I researched them and discovered that $45ish is better than $60ish!

Anyway… Sophie was able to walk away from it without a meltdown (YEAH!!) but has not forgotten it at all.  We’d looked at it online, even watched the video so that she understood that it was not a truly ALIVE tiger, it was simply a robotic TOY… which she was already aware of (the eye roll for that explanation was priceless!).  She has been doing some minor wheedling and suggesting (she’s so her mother’s daughter!) just to keep the idea current in EVERYONE’S mind, but today she tried a different tactic.

She wrote to Santa. 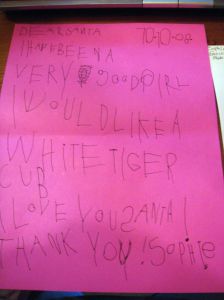 Seriously, she wrote the whole letter by herself* only asking me how to spell the words occasionally.  Then she asked me to find Santa’s address** and help her address the letter.  So I did.

We’ve never made a big deal out of Santa.  We didn’t start Sophie out with asking Santa for her Christmas presents… matter of fact, she’s never been to see Santa, although she’s met him a time or two on the Polar Express train ride and once when he fell asleep in our foyer.

It’s almost as if she’s gotten frustrated with our lack of action concerning her preferred gift and has pulled out the big guns on us!  Like she’s thinking:  I didn’t want to take this to the top but you’re forcing my hand!

So it looks like I’ll be hoofing it over to BJs sometime before they close to pick up her Tiger Cub, and on the plus side it may be on sale.

I love that kid….

Now if I could just convince Dandy that he doesn’t really need a FULL-SIZED pirate ship!  Arrrr!

*For those of you who don’t know “about” Sophie, writing has never been easy for her and is something we’ve struggled with since she started school.  For her to initiate anything handwritten is amazing!  I think all those sessions with the quills and dip-ink pens is starting to pay off!!

And there’s also this site that actually writes back.

One thought on “How Sophie gets her way”