So obviously I didn’t post right away as I had planned.  Turns out Dessie is what the cattle people call a “dummy” or “silly” calf, meaning he didn’t have a suck-reflex.  We tried leaving him with Maisie but after we were sure that he was not eating we decided to step in to help him and to keep Maisie from developing any udder complications.

We moved him from the cow paddock to the back porch (hey, at least it wasn’t inside… we have a history) so that we could keep a close eye on him.  I’ll tell you, moving 60lbs of unwilling calf  isn’t easy.  When I attempted to pick him up he went all limp and boneless so that it was impossible to keep a hold of him so we ended up piling him into the back of the Polaris and trucking him down to the house.  Getting him onto the porch wasn’t so hard, but luckily Jim was here to do that.

Maisie, being used to a dairy setting, wasn’t particularly upset that we took wee Desmond, she looked for him briefly and then went back to munching her hay.

Anyway, it took several days of back-breaking work but by golly that calf will suck a bottle now.  He’s quite the imp, cavorting all around his little calf pen, sucking on people’s pants when they turn their back unexpectedly.  He still has his great big giant ears, but he’s the cutest thing.  No horns too!  Must come from his 1/4 Holstein… I’m thankful for that!

We named him for Sophie’s b&d doc…. partly because he’s Irish and we picked Maisie up on St. Patrick’s Day and partly because of … well, let’s just leave it at the Irish thing 🙂

Here’s a pic taken on Saturday by Julie: 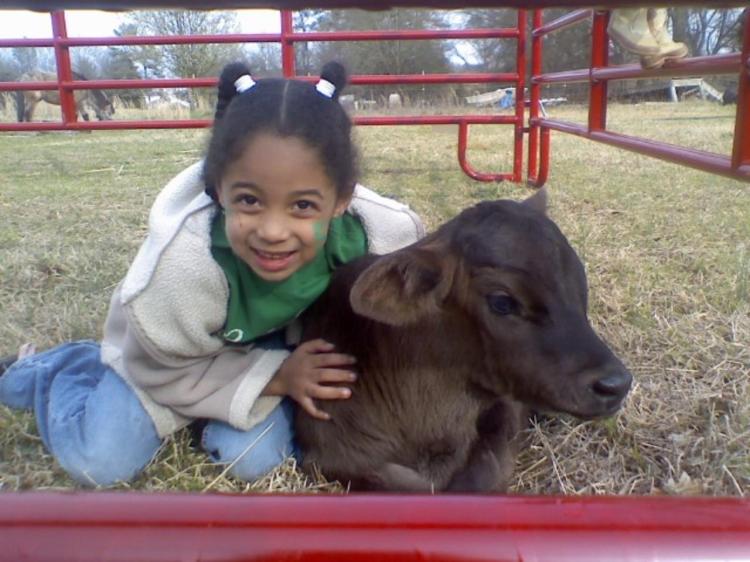