So last week was…. well… it was just wow.

On Saturday we met up with J’s sis and brother and their families for my first ever tailgating experience at Clemson’s Homecoming.  Wow is all I can really say.  My brother-in-law Stephen is a marvelous photog and took some spectacular pictures, seriously click through them to see orange clad cuteness… It’s a good thing that Pip’s HP colors are orange otherwise we would’ve been dressed inappropriately! 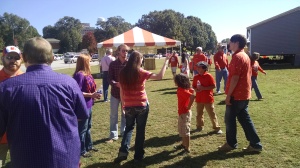 We walked all over the place, looked at the floats, had hamburgers and beverages at the rockstar RV… and basically had a blast.  The boys played until they were exhausted and Sophie basked in the awesomeness of her cousins.

And then came Sunday!! Horses loaded, costumes packed and away we went!!

This was our first year competing in the costume division. Pip and I went as Angus and Merida.  We didn’t win as Pip wasn’t technically in costume since he passes as a twin to Angus… but we had fun 🙂  I got to wear this awesome wig made by Katie of Top it Off Hats. 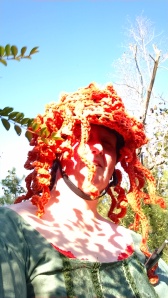 I sent her the most hilarious email asking if she would be able to modify her kids’ Merida wig into a helmet cover and turns out Katie is also a avid equestrian and as luck would have it we have the same size (dimensions) helmet so she made the wig on her helmet and it of course fit mine perfectly!! She is awesome!

We were parked in a huge grassy field… with seed heads as high as Pip’s mouth lol.  It made for some most interesting tacking up as all three horses wanted to gorge instead of cooperate.  Obviously Pip and I went as Angus and Merida.

The pace photog was able to get an awesome shot of Pip giving me the spooky eye just at the start of the pace. Pip was a bit uncertain about my red curls and Meredith’s wings but he settled in fairly quickly… 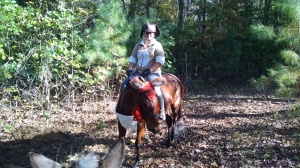 L and Paris went as the Fox and the Hound. L’s mother made the bulk of her costume and Paris was a real trooper with her whiskers and fluffy ears. 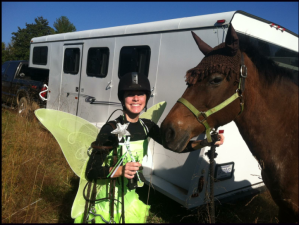 Meredith and Maddy were Tinker Bell and Pixie Dust…. Those wings were hilarious every time we cantered as it appeared that Mere and Maddy were going to lift right off into the air!!  Be sure to notice Maddy has little tiny antennae!  Also notice the grass!!  It was insane! I still have seed heads in the truck and there are gobs in the trailer that were caught in the doors!

We had a good brisk ride… altho not fast enough for a ribbon.  I was under serious time constraints as I had to get back home before 2 so that M and I could leave to go to Maryland to pick up horse feed (I’ll explain the need to go to Maryland to get feed in a later post).  After getting the truck stuck in the tall grass we were on our way home where I basically dumped all the care of my Pipper on Mere and L so that I could get everything in the car and ready to hit the road yet again. Thanks girls for hosing down and putting away my pony 🙂 and for unloading the trailer too… I really hated not seeing to my own horse but we were running a little late and so many things still needed to be done before we were off again!

We decided to take the recently purchased X5 as it gets superior fuel mileage (can one say gas mileage for a diesel?) and had plenty of room for the amount of feed we were purchasing.  Plus driving the X5 is fun and since driving was going to figure prominently in our adventure it seemed like a smart choice…

It was a beautiful drive up.

We had great adventures in refueling pretty much at every stop… thank you trucker in Raphine VA for flashing me in your tidy whities… and I won’t begin to list the ogles I got for wearing my riding pants.

Yes I rode to Maryland in my riding pants… full seat breeches on leather seats for long distance driving is my new must have.

So we got to our hotel and crashed… I think we ate but can’t honestly remember at this point as it was a loooooong drive to Maryland and the effects of power walking at Clemson coupled with my ride at the pace as well as all that time in the car had left me stiff and achy.

We were up early to a cool crisp morning and headed out for Gooseberry farm (I’m just going to call it Gooseberry farm from here on out… I don’t know the actual name of the farm but she sells and makes Gooseberry so it makes sense for me).   Unfortunately Dr.Deb was sick and couldn’t come out to chat but her son AJ was there to help us pack up. 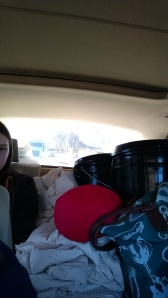 The X5 handled no differently for the addition of feed and so we decided to jaunt around the area and enjoy a mini vacation.  So off we headed for Lancaster PA where we grabbed a tasty lunch at the Shady Maple Farm Market Cafe.

M and I had the pork and kraut. 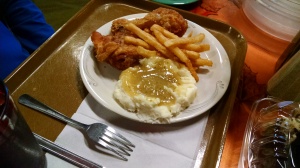 While Sophie had the broasted chicken (evidently a specialty of the cafe).  We were amused to see a huge “Oriental buffet” in the middle of the cafe.  I wasn’t expecting to see a spread of wontons and rangoons in the middle of an Amish/Mennonite grocery store but it appeared to be very popular with the locals.

After eating entirely too much at the cafe, we walked across to Good’s Store and found all matter of cute and wonderful things…. none of which will be pictured here as they will be reappearing later this year under our Christmas tree!  It was a fun adventure and Sophie in her typical style discovered the names of every store clerk we came in contact with, which may have been disconcerting to them but they thankfully rolled with it.

And then we were off again to Carlisle PA!

The day was truly beautiful with all the gorgeous farms still green against the bright blue sky!

As with most of our adventures, food figures prominently and we had intended to eat at Fay’s in Carlisle, only to arrive and discover that Fay’s is closed after lunch.  So we drove around briefly with M giving us the penny tour as she’s been there before with my brother who makes a yearly trip up for Banner of Truth.  It’s a lovely town, very quaint.  We decided to drop into my brother’s favorite bookstore (and send him photo texts with “where are we?” attached lol… we are mean people)

The name of the store escapes me, but it’s lovely.  I found a stack of “ancient” books that I wanted to bundle up and bring home… but their corresponding price tags kept me from doing so.  There’s something about really old books that I just love, doesn’t even matter the subject matter… I find them fascinating.

M remembered eating at a pub just down from the bookstore so we walked down to check it out. 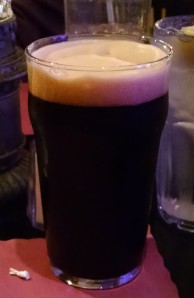 I was not disappointed.

Market Cross Pub in Carlisle… awesomeness indeed.  I had their home-brewed Porter and it was delicious and wonderfully paired with the fish & chips and the chocolate chip sundae as well 🙂  I wish we had something more on par with this pub at home as the ambiance was perfect and the staff reminded me of the heydey of Velo Fellow when Dragon was still there.  Thanks Joe (our server) for being awesome… and looking like the blond headed bad guy in Top Secret!

After enjoying our early supper we decided to head on down towards Charlottesville VA.  Michie Tavern was on the docket for the next day and we wanted to be close enough to allow for a restful night and an early lunch before the long drive home… little did we know our adventure was just beginning…

Stay tuned for Part II of our epic whirlwind adventure.